Pulling it All Together: EVV Rollout, Training, Outreach & the Future 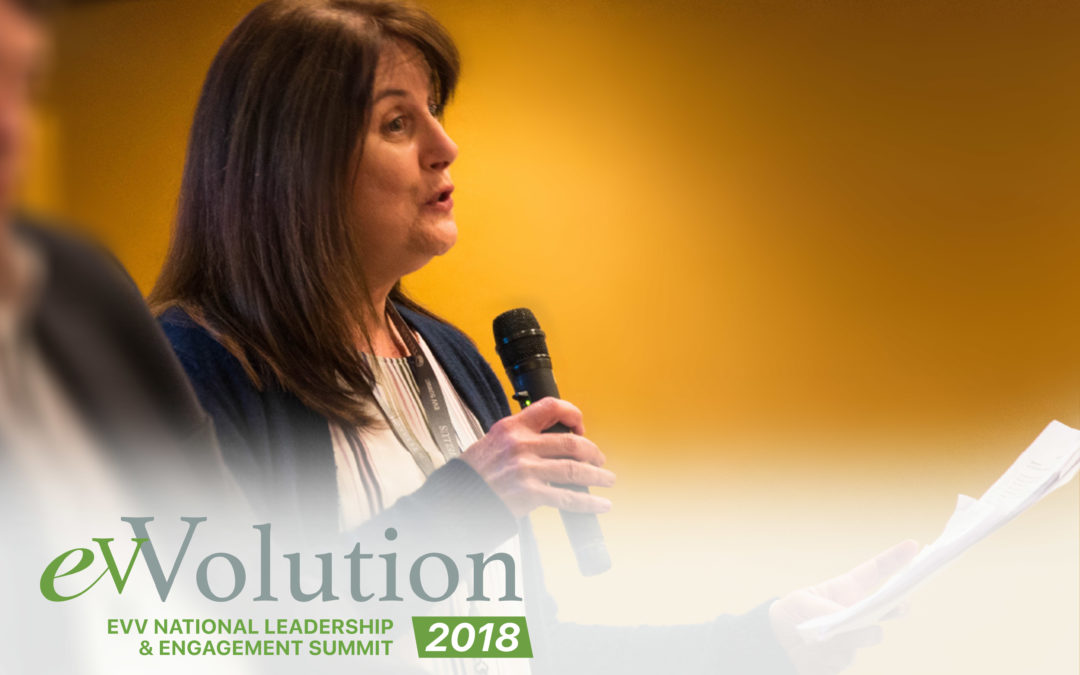 On the second day of the 2018 EVV Summit, presenters got down to the essentials and laid out a working outline to prepare for a successful launch of Electronic Visit Verification (EVV) and to solidify the future of the technology for years to come.

The first session, Requirements, Considerations for EVV Rollout, was presented by PulseWorks founder Mark Dillon. The second presentation, Where is This EVVolution Headed? was directed by Jennifer Burnett, Principal, Health Management Associates (HMA), who discussed the evolving future of EVV and HMA’s EVV 2020 white paper.

Tellus CEO Brad Levine began the Summit’s second day with opening remarks, thanking the speakers, panelists, moderators, and audience for “stepping up to the plate” and moving the conversation regarding EVV forward in a beneficial way. Levine said he expects the conversation to expand for next year’s 2019 EVV Summit happening May 1-3 in Fort Lauderdale, with more than 250 participants covering a wide range of topics.

The conversation will center and expand around skilled nursing, the VA, Medicare, devices, forms, timesheets, biometrics, apps and more.

“It’s going to grow and be broader,” Levine said.

Levine also said that intense engagement among participants at the summit led to talks to form a national trade group, which he announced was formalized at the end of the conference. The National Electronic Visit Verification Association (NEVVA) was incorporated June 21, 2018, and Mark Dillon was named as its Executive Director.

Dillon, who characterized himself as “an EVV nerd” has more than 30 years’ experience in large-scale data processing, including the past 12 years in the GPS location-services industry. He completed the first GPS EVV-based implementation for a State Medicaid Department and its respective MCO contractors. He is jokingly referred to as “the grandfather” of the EVV business.

“We are past the disruptive point of this technology,” Dillon said. “The real challenges are how will states and MCOs decide to roll out EVV, and who is bearing those costs.” Other important considerations include whether payers or payer organizations deploy dedicated devices to consumers and members, how to get smart devices to caregivers, and how to leverage EVV to improve and speed payments to payers, he added.

The way Dillon sees it, the move from weekly to real-time billing results in a shorter revenue cycle for companies big and small. “I would bill daily because this technology will allow you to do it,” he said.

Summing up, Dillon said mobilization of home care, as a result of this technology, is going to increase at a more rapid pace than first considered and provide real-time quality improvements in home health care.

The affordability conundrum plays out only if the system is implemented wrong, he noted. As with most matrix’ for disruptive technology, cost pressures at inception that pressure bottom lines eventually developing into profitable models, he said, adding that even the detractors are in consensus over the value-add of EVV.

Burnett, a past Director for CMS provided a personal example of the transformation from paper to electronics after she left the government agency and returned to Pennsylvania in 2015. Every year, 620 nursing facilities in Pennsylvania that participate in Medicaid would submit information that had to be audited on their cost reports — all coming in in file boxes, she said.

“It filled up an entire office and then went out to storage,” she said, “and was filling up rooms and rooms with these piles of boxes.”

She then asked her CFO “to go digital on this.”

Tellus’ Lia Sweeney, who gave the final presentation, compared preparing for EVV to the June 1 start of the hurricane season in Florida, and that there is a need to prepare for the storm.

“For people who are not yet using EVV, getting to the point of replacing their current processes with EVV technology is still going to be disruptive,” she said, noting that workflows have to change. “Change is difficult for people.”

From what she’s experienced, those proactive with EVV deployments who ask questions and sign up for webinars and training sessions are better prepared to weather the storm, compared to others worried about how it will affect their payroll, or are nervous about burdensome technology that is hard to use. One-on-one training sessions for the claims process are essential to customer service, she added.

“There are people who really have had experience with EVV systems that haven’t worked. They have legitimate fears based on past experience.”

Those need to be addressed in meaningful and constructive ways, she added.

CMS released training guidelines in May for family caregivers and beneficiaries, a growing space in the self-directed market, Sweeney noted. The responsibility of training could fall on the vendor, MCOs or states, depending on the model chosen.

Mandatory training is an option being explored due to a reluctance to participate in live training sessions, she said.“Many people won’t touch the system until they are required to touch the system.”

To that end, Tellus is consistently involved in active outreach to assist participants with podcasts, videos, webinars, and live one-on-one training to implement and use the technology.